Tottenham Hotspur 20/21: WE SIGNED A STRIKER! (I mean, besides Alex Morgan)

Kliq said:
Harsh but a lot of truth in this Tweet:

I don't buy that. Last year, the Athletic was pumping articles out about how OGS was a genius for figuring out a system that accommodated Rashford, Martial, Bruno, etc. I agree with that--once Bruno arrived, United hit another level and they couldn't stop scoring. the D still needed some work, but Bissaka had a terrific year, Maguire looked worth the fee, etc. So that only leaves a couple of major players on the pitch yesterday who represent a big difference--Bailly and Pogba.

As for Spurs, yesterday was fantastic, but let's not get ahead of ourselves. Sanchez still gave away a bad pen, Aurier still wasn't hitting good crosses in, and most of the 2nd half should be taken with a red card's worth of salt. Spurs struggled to unlock 2 UEL prelim sides, couldn't bury Newcastle, and got run off the pitch by an admittedly resurgent Everton side before this. All the more recent results and performances are obviously encouraging, but let's not swing wildly from despair to elation, at least not this early. I'm as bullish as anyone on this team and I will absolutely give them credit for crushing United while they're down a man and down in form generally, but I'm also trying not to get carried away in October.

Zososoxfan said:
I will absolutely give them credit for crushing United while they're down a man and down in form generally, but I'm also trying not to get carried away in October.
Click to expand...

I think the difference is now the Spurs have pretty good depth, we should not get worn down. They can run out 22 different starters. You can quibble a bit with who is in each squad, but still:

And that depth chart is missing Sissoko - assuming there are no outgoings today that's up there as likely the deepest overall squad in the prem.

With that in mind, having picked Doherty & Bergwijn somewhat early in FPL draft seems really dumb in hindsight

Yeah, the person that posted the charts later admitted he forgot Sissoko.

There's a lot of mixing and matching we can do there.

--Gazzaniga possibly on loan to Everton.
--Eriksen offered back to Spurs, with Inter willing to pay 50% of wages.
--Rudiger still a possibility.
--Porto may want Rose to replaces Telles.

wants to be caribou ken

DJnVa said:
--Eriksen offered back to Spurs, with Inter willing to pay 50% of wages.
Click to expand...

Late talk about Joe Rodon, CB, from Swansea. They have until 10/16 to sign him though as he's an EFL player.

I dare to allow myself to feel some optimism. I'm still not sold on Jose show, and the wheels could come off at any moment, but right now there is a lot to like about how this season has gone.

Everton probably won the transfer window, but Spurs can be a close second. They upgraded both fullback spots with attack-minded players that have had success playing at the highest level. They got the elusive backup striker. They got a steady holding midfielder that has been very good so far (that Hojbjerg assist to Aurier yesterday was tremendous). Oh yeah, they also brought in a potentially world class winger on a sweetheart deal. The depth of the squad is so much better than last year, and while players like Davies, Winks, Aurier, Lamela, etc. have their faults, they are useful to have when you are playing in four different competitions throughout the season.

Perhaps more importantly than any of the new signings has been that it appears Ndombele has worked himself back into the first team and looks more like the player Tottenham thought they were going to get when they signed him to a record free. Ndombele is the theoretical player that could solve most of their problems if he can just stay fit and on Jose's good side.

The thing that does appear to be breaking for Spurs is that the league is more open than most people imagined. Liverpool may not be as good as they were last year; Man City are definitely not. Manchester United and Chelsea still have huge question marks and are off to slow starts. The larger mid-table clubs (Everton, Villa, West Ham) look better but probably won't keep up this pace. Finishing in the Top 4 felt like a pipedream at the start of the season but seems like a real outcome right now. With this kind of depth they also appear to be a favorite to win Europa League (Oddschecker as them below Arsenal and tied with AC Milan for the second-best odds) which would be huge for the club.

I was full-on ready to go Erik Lamela "My friend, we can win the league!" yesterday before Villa beat Liverpool even more severely than Spurs beat United.

I have since retreated to the saner, safer ground of "Spurs look like a more complete squad than I've seen them in a half decade and also it is going to be a very weird season".

I do look at every team in the preseason consensus pick Top-4 and, depending on whether Liverpool have blipped or fallen off, which of them has a defense that is much better than mediocre? Spurs are not drastically better, but I dunno whose CB situation I'd swap Spurs for apart from Liverpool assuming VVD recovers form. 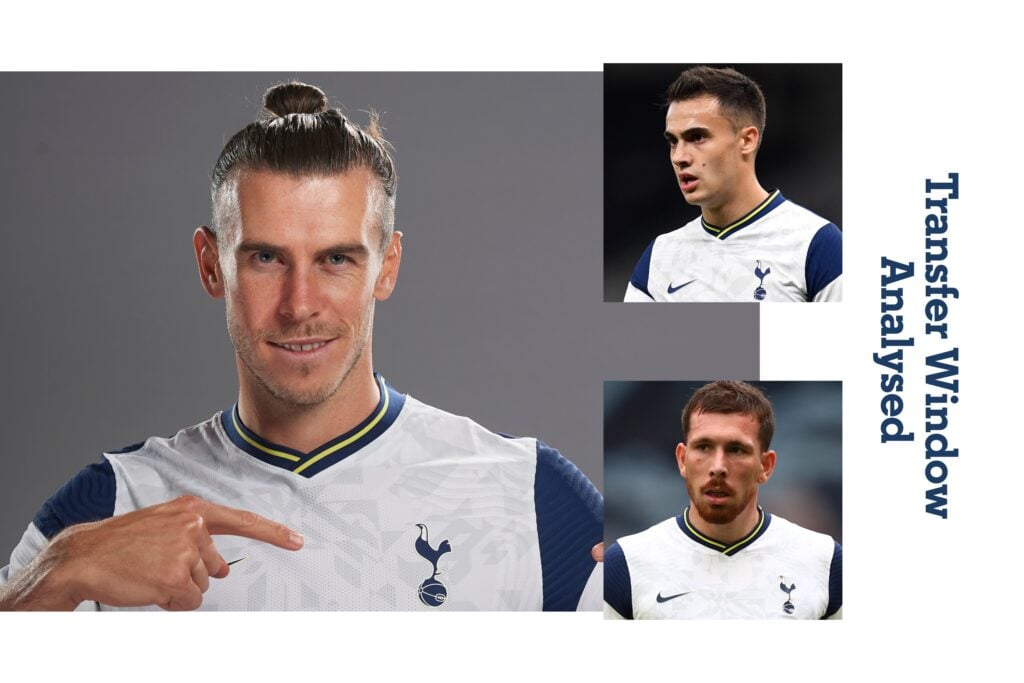 Charlie Eccleshare rates Tottenham's transfer window as a huge success, with holes in the team filled after some bargain deals

Spurs still after Rodon. To be eligible for Europa League, they need him by close of business today, but have until next Friday to bring him in for other competitions. 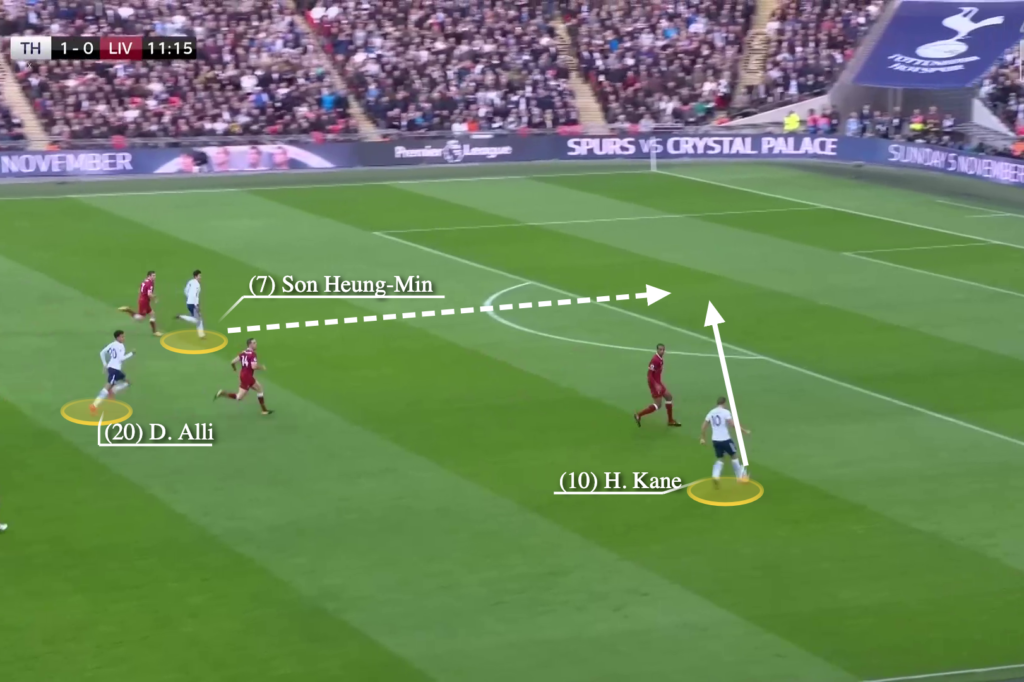 The Spurs duo have combined for more goals than any other current Premier League pairing - but the type of goals they score has changed...

You didn't think you needed to see Son Heung-Min lead a fastbreak but you actually did. Also, they really needed to put Bale and CCV on different teams:

Kliq said:
You didn't think you needed to see Son Heung-Min lead a fastbreak but you actually did. Also, they really needed to put Bale and CCV on different teams:

IDK, some of those jumpers were pretty suspect but considering they were fucking around with the a basketball on a turf field, I was impressed by the Bale/CCV team. Having no basis for this except for that video and knowing his background, I'd imagine CCV might be the best basketball player in the EPL. I believe David De Gea is quite good, though.

I'm fascinated by watching professional athletes play others sports and will watch almost any YouTube video featuring that.

Lo Celso gets day off, no Dier, Dele, or Lamela either.

Bale on bench, along with the new striker Vinicius. Bergwijn gets the start out wide.

The Korean Zombie loses, Loma loses, Spurs blow a 3-0 lead, and the Pats are about to lose.

What a shitty, shitty sports day.

Not sure how many people caught the Europa game this week, but Vinicius started and made some really nice plays. He set up the first goal with a well-timed pass to Lucas that made it look like they have been playing together for years. On the second goal, it was his run into the box that Bale was looking for that would have been a tap in if the LASK defender didn't turn it into his own net. On the third goal he picked up his second assist, a really savvy header on a ball from Doherty to set up Son 1 v 1 with the goalkeeper.

Saw the whole match. Son clinical again with the second goal but Vinicius was the MoM for me.

Mo has a great second wave of subs now, with Vinicius, Moura, Bergwijn, etc. The depth on this team is pretty impressive.

Ugly 3 points. Kane saved us at both ends.
Along with Dele not making the squad, neither did Davinson, Serge, Bergwijn or Gedson (meh).

wants to be caribou ken


It’s a link to José starting his answer to the question “how do you explain Son & Kane’s great play together?" with “ to start you have to credit Mauricio”
Click to expand...

That was ugly, and the step down from Regulion /Aurier to Davies / Doherty seems really steep, but nice to get a crappy 1-0 road win for a change.
Last edited: Yesterday at 11:18 PM

Doherty seemed fine to me, but Reguilon to Davies is like Formula One racecar to Yugo.

The rest just seemed like one of those games that you take the points and get out of town. Spurs now have best GD in the league.

Yeah I mean if this team is really going to challenge for the title, they just needs points week in and week out. It's not always going to be a 6-2 drubbing of a top 6 side--3 points @Tuf Moor after a Thursday UEL game is fine by me no matter what.

And now a Thursday Europa game where Reguilon, Aurier, Vinicius, Sanchez, Bale, and Bergwijn etc. didn't have to play and Lo Celso only went 20 minutes.

EDIT: I don't think Moura was all that good today.

A dud of a game, but Spurs snatch 3 points at Burnley by nicking a goal off a corner. Very few chances either way. Burnley's only real chance was a header from a corner that Kane cleared off the line.

The victory takes Spurs into 5th on 11 points, only two points out of 1st. The four dropped points at home to Newcastle and West Ham loom large. After losing the first game of the season against Everton, Spurs have a 10-game unbeaten streak in all competitions, with 8 wins and the two home draws where they blew leads in injury time in bizarre circumstances.

The next two league fixtures are Brighton and West Brom. Six points are a must, because after that is the hardest stretch of the season: City. Chelesa, Arsenal, Palace, Liverpool, Leicester, Wolves

EDIT: I don't think Moura was all that good today.
Click to expand...

Moura was awful. I don't think he should have played, this was a game that where they needed more vision and technical ability and Moura doesn't offer those things. The attack looked significantly more fluid after Lamela came on (and Lamela is hardly KDB, but he's better than Moura).

The chemistry between Kane and Son has been unreal, obviously. This clip went viral a bit yesterday:


Son is just as happy for Kane to get an assist as he was for his own goal. With the rumors of a new contract for Son, hope these two play together for a long, long time. They're certainly on a pace to break the Premier League record for most combined goals between two teammates: