This week marks easily the most significant week for baseball in Montreal since the Expos left in 2004.

Following almost two years of renewed interest in baseball since the death of Gary Carter, including fan rallies, reunions, baseball clinics and Can-Am League professional baseball, the Blue Jays will play the Mets in two games at the Olympic Stadium this weekend. Evenko (the events arm of the Canadiens) and Warren Cromartie's Montreal Baseball Project helped make it happen. The province of Quebec had to spring for new batting cages and the field had to be rebuilt for baseball - most of the Expos' field equipment now sits in the Canadian baseball Hall of Fame in Ontario.

Which is nice enough, but it also marks 20 years since the ill-fated 1994 Expos, who were as good as almost any baseball team most of us ever saw, and were 74-40 and in first place by six games when the strike happened. There will be a reunion on Saturday night before the game with almost every member of the 1994 squad who not directly managing or coaching a team attending, from Pedro, Larry Walker, Moises and Felipe Alou to people like Heath Haynes and local hero Denis Boucher. There's also plans for a small fan rally by the Expos Nation group, who are running a competition to find the five best moments in Expos history.

That will follow a tribute to Gary Carter on Friday night with Carter's family attending, along with Steve Rogers, Warren Cromartie and others. Tim Raines is a Blue Jays coach and will also be on hand.

It is, quite simply, the hottest ticket in town. 85,000 tickets have been sold for two games, and they are opening up parts of the Olympic Stadium that have not seen butts in them for baseball in over 20 years, as Evenko expects a strong walk-up and for the two games to potentially crack 50,000 each. Not since the Phillies series in 1993 has an MLB game in Montreal drawn 50,000.

The field is almost ready:

Nice touch with the Montreal script behind home plate.

There's a couple excerpts out about Blue Monday and Dennis Martinez and they've made my mouth water about this book, which I don't get for another month because I live in the baseball Sahara of England. Dammit.

But Jonah's been doing the rounds, and then some, appearing on TV and radio all over Canada, doing a Reddit AMA, appearing on the Nerdist and so on.

Almost as an after thought, Bill Young and Danny Gallagher have written a book about the 1994 Expos called Ecstasy and Agony, which has also received some nice reviews.

I read the Blue Monday excerpt and was gripped by it. Fascinating stuff. Rogers was brutally direct in saying he had nothing that day because his mechanics were all screwed up.

Montreal fans -- and yes, they did have fans, but the strike in 1994 combined with the ownership debacle that followed -- really got screwed. I would love to see a great baseball park in Montreal welcoming the Rays or A's.

And this is yet another reason to love Pedro.

Annakin Slayd, who is that guy that every city has who makes songs about the local team (but is actually good), put out a new song about the 1994 Expos.

And Jonah Keri's doing the rounds:

I started Keri's book last night without much knowledge of the history. Enjoying it a lot so far and having been to Montreal 4 or 5 times in the past few years and falling in love with the city it's a shame they don't have a team anymore. 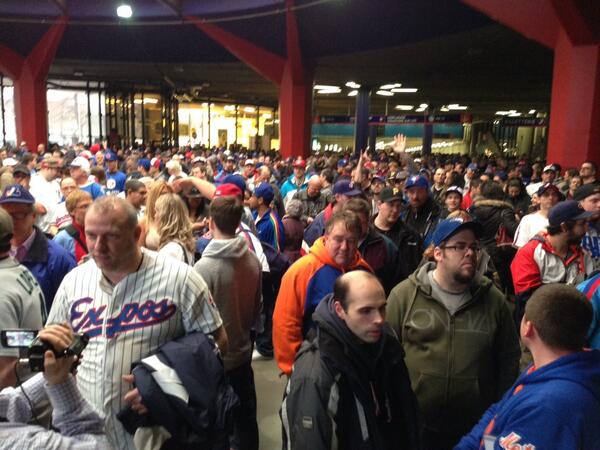 There are over 50K in the stadium for today's game. So far 0-0. DiceK was pretty wonderful, got 8 strikeouts in 5 innings. On mlbn, 8th inning. There's one important question requiring an answer: did Pedro show up?  He's not in that 1994 reunion picture unless he's in the Youppi suit.

Pedro pulled out at the last second, unfortunately: 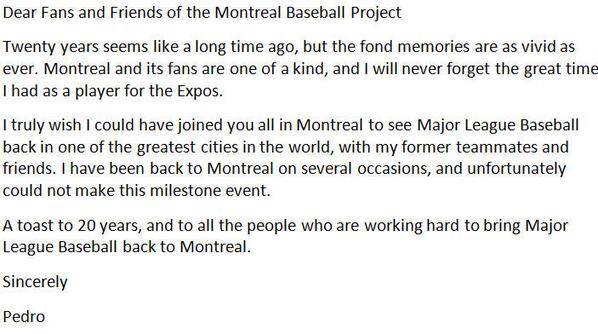 I'm guessing something came up, as everybody thought he was in until the night before the reunion. A real shame - he'd have got one of, if not the biggest cheer of the night (after Felipe Alou).

A heck of a cheer it would have been too: