The 2021 World Series: Braves vs. Astros

You can do a swim slide as long it’s not breaststroke.

Not going to get any sympathy here over them being robbed by the quirks of their park...not after last week.

rajendra82 said:
You can do a swim slide as long it’s not breaststroke.
Click to expand...

Remagellan said:
Not going to get any sympathy here over them being robbed by the quirks of their park...not after last week.
Click to expand...

Also, while we are at it, I hope the Crawford Boxes get eaten by rabid Oklahoma termites during the off-season.

Poor Braves fans...this has to be torture

That was really close to take. Umps tend to give that to control guys. Not that Smith has great control but tonight he is around the zone

Rare 3 strikeout game for Altuve. Would be like Nomar striking out 3 times in a game.

Altuve was waiting on a moment, but the moment never came.

Losing Morton is like if the 67 Sox lost Lonborg in Game 1.

Minter probably won’t be available tomorow and Matzek threw 1.1 Fried needs to give them length tomorrow. Snitker now has to manage the bullpen without a clear Game 4 or 5 starter.

Looking at the highlights this morning. One of the TV commentators (Smoltz?) on Gurriel getting thrown out at second: "He got shortchanged by the dirt."

Seriously? The league's leading hitter, in his home ballpark?

And Morton will not be ready in time for ski season.

Hope it's not too soon to discuss games 3-5...When Houston goes to Atlanta, there's no DH. You have to think that Alvarez has to be in the lineup since he is hitting a ton. The only place he's played is LF. Can't take Brantley or Tucker out of the lineup, so McCormick sits. None of these 3 guys are Center Fielders, Brantley hasn't played there since 2015 and Tucker has 5 career games playing CF. I guess Brantley goes to right and Tucker to center. Regardless, someone is out of position, and that may be a factor when the series shifts to Atlanta.


The roof will be open at Minute Maid Park for tonight's World Series game. You would be safe to assume this was league directive and not the wishes of the Astros. Home teams generally prefer roofs to be closed because it leads to a louder stadium and a perceived advantage 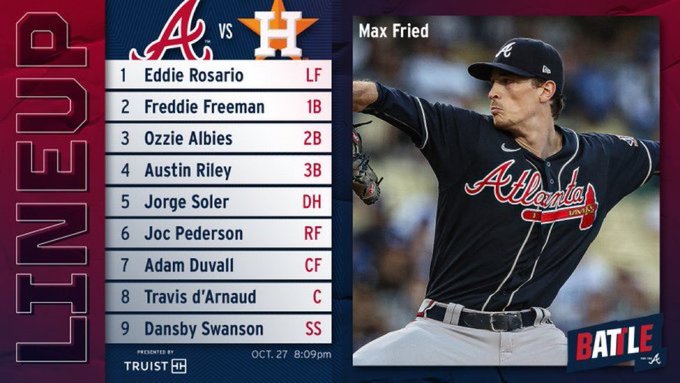 yes you do, David

that’s a pretty deep lineup for an NL team

Ron Kulpa will have the plate tonight. Hoo, boy. Among the 90 umpires with at least ten games behind the plate this year per Ump Scorecards, Kulpa was 88th in ball-and-strike accuracy. He posted the worst game of anyone in this group all year, missing 15% of the calls he made. Just four umpires this year have a greater effect on the run scoring in a game than Kulpa does. Over the course of his career, Kulpa is one of the most pitcher-friendly umpires in baseball, boosting strikeouts and holding down run scoring more than all but a few of his peers.
Click to expand...

On the one hand, yuck. On the other hand, the Braves desperately need Fried to go 6 or 7 innings tonight...and this can't hurt.

Ale Xander said:
Soler hits a lead off home run and gets moved to 5 and Rosario back on top

that’s a pretty deep lineup for an NL team
Click to expand...

LHP last night and RHP tonight. I'm sure it's nothing more than that.

Ron thinks the game is about him

What's the record for most infield hits by one player in a World Series?

These strikes are not strikes.

man this zone is enormous

hitting the other way for non-homeruns. what a novel approach.

Awful at bat by Soler.

Fried should be able to use that to his advantage.

What do I know, but that looked like an awful pitch to Altuve.

Fried not missing bats so far.

InsideTheParker said:
What do I know, but that looked like an awful pitch to Altuve.
Click to expand...

You know a lot.