We skipped last year, so this is the 14th Annual contest. Copying and pasting from 2019:

Here are the rules:

-You can't pick someone that's already been picked.

-The player has to be on a MLB active roster during the regular season prior to their surgery, (if they're in the minors it doesn't count), so if they aren't on the Opening Day roster you are putting your pick at risk. If they get called up on April 10 and get the surgery (and they have to HAVE the surgery for you to win) later that year you qualify, but if they start the year on the DL or in the minors and never get activated they aren't going to count


-Put your choice in bold.

I'll hold off making my choice for a bit

Crow216 won in 2019 with Jordan Hicks. Wingack also had Hicks but he picked him after Crow did. Something about these Yankee fans knowing this stuff smells rotten to me

has a special friend in GHoff

Why not something else horrible for him.

Does not enjoy the go

Found no thrill on Blueberry Hill

The safest place in the U.S., except for the occas

Going to roll the dice that Carlos Carrasco tries to rush back from his hammy strain and winds up blowing out his arm.

I wanted Taillon, but - Jordon Montgomery, come on down!

The cradle of the game.

Liking my chances this year...

Per the Padres’ page, he is on the active roster as of today, just past midnight on the East Coast, on the day of 4/1, their Opening Day. Photo evidence; can be revisited in 2.5 hours if need be when the date flips to 4/1 in San Diego: 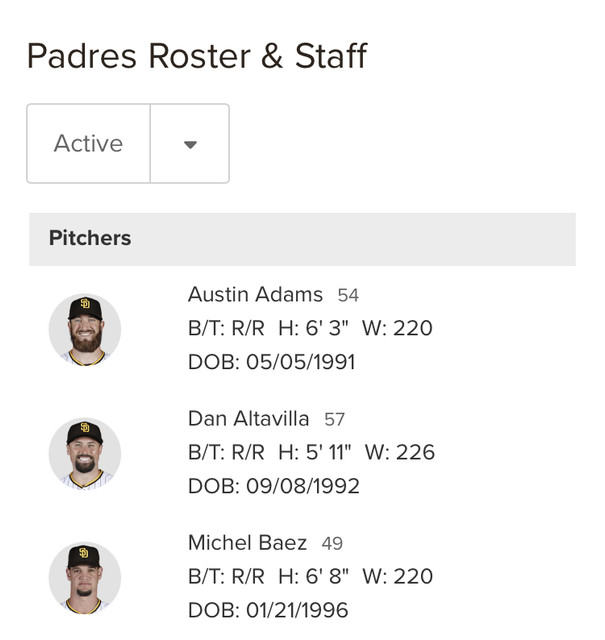 Edit: EE is fair and right, below. Won’t be using Baez here. Player unbolded as much; replacement pick in next post.
Last edited: Apr 1, 2021

paying for his sins

C'mon, Jess. This was reported a couple of hours ago:

Edit: It's a terrible contest anyway, but that pick seems like maybe a letter-of-the-law but not spirit-of-the-law sort of thing.

That’s fair, and in retrospect I think you’re right. So as much:

(elbow discomfort, but no testing done yet that I know of)

(elbow discomfort, but no testing done yet that I know of)
Click to expand...