InstaFace said:
I've seen Serena come back from 0-3 and 2 breaks down in the 3rd in a major (against a brit on Centre Court no less), but you certainly wouldn't put money on it being done by anyone, nevermind a 15yo.
Click to expand...

I don't remember if it was one break or two but Coco did this in the second round here.

Coco had a couple of break points that game but Kenin fought her off, 4-0 now.

Coco will learn from this, she needs match experience.

She’s letting the mistakes and bad breaks snowball on her.

Kenin closes it out 6-0 and will be the favorite in her next match too. I am not too into any of the remaining women, predicting Halep over Muguruza and Kvitova over Kenin in the semis and Kvitova over Halep in the finals.

Federer's draw continues to open up, with Sandgren up two sets on #12 Fognini. Fed has to beat #67 Fucsovics tonight and then looking like #100 Sandgren, and he's into the semis. Sandgren has been playing well but that is still a really nice draw for the Fedster.

Sandgren fights off yet another comeback from the resilient Fognini and closes it out in 4, Novak/Fed semi increasingly looking like a lock.

You early risers should get some Fed today, he started around 5 AM EST. 3-3 in the first set with no breaks, Fed trying to fight back from 0-40 now.

Fed fights off two but not the third, 4-3 Fucsovics.

Fucsovics served out the first but Fed has been steamrolling since, 4-6, 6-1, 3-0 currently.

The conclusions people would draw if this were two entirely different sports played by men: "wow, that first group has top talent that's a lot closer to each other in level, lots more players have a real chance, nothing is preordained, this is fun to watch!"

The conclusions people draw being as it is the same sport played by women and men: "The women are mentally weak and can't stay consistently great."

I don't think it's a male/female thing, the state of tennis (male or female) has always been judged by whether there are alltime greats in their prime currently active or not. Obviously Serena is still active, but it's pretty clear there's a void behind her and has been for a long time (which is one big reason she has so many majors, another is her greatness, another is Henin/Clijsters both having truncated careers). When guys like Gaston Gaudio and Thomas Johansson and Albert Costa were winning majors at the same time that Venus and Serena and Henin were in their prime, people were saying the same things about the men's game.

Halep up a break early on Mertens.

Halep is a good example, she has been a top player for years, she's won two Grand Slams, she's made the semis at all four tournaments.

Great night on paper on the men’s side, hopefully Kyrgios is recovered and can push Nadal some.

Wow, the WTA will allow coaching from the stands for most of the 2020 season: 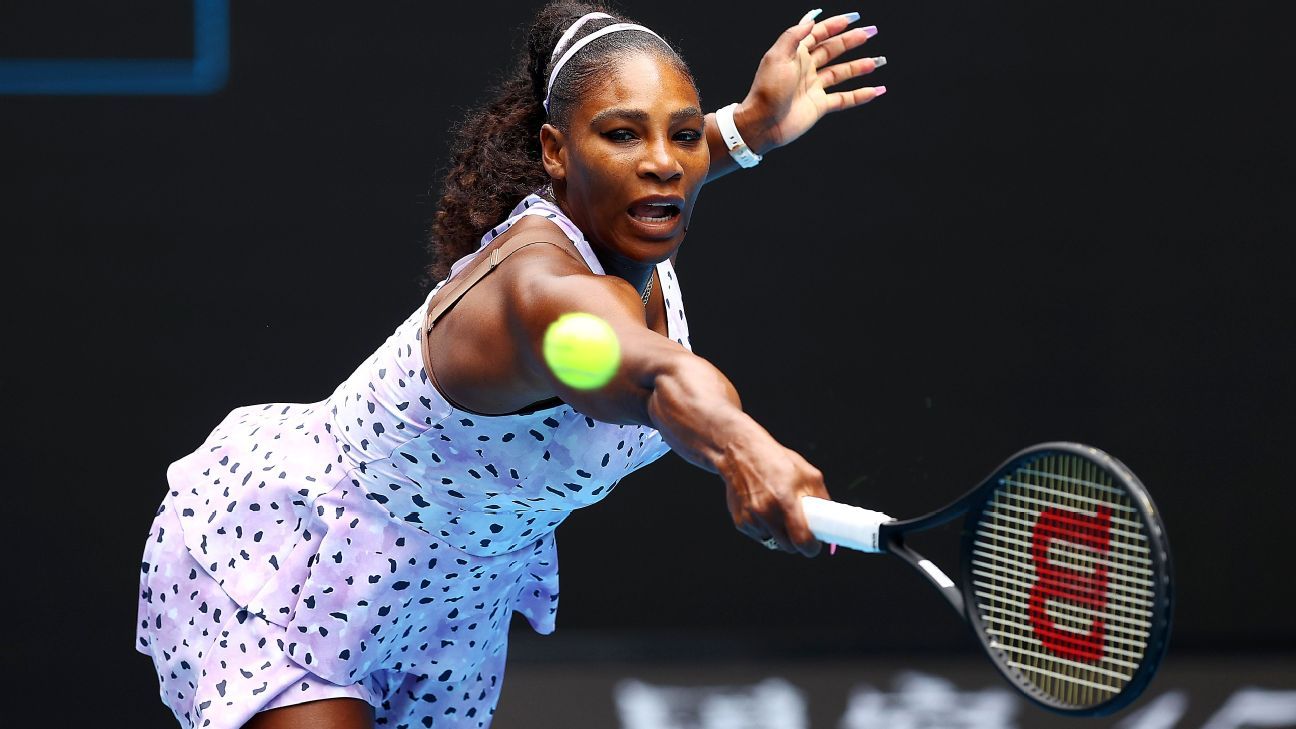 WTA to allow coaching from stands in trial period

The WTA Tour will launch a trial period in which coaching from the stands will be allowed without penalty.

Thiem blitzes Monfils in straight sets, he looks great and next faces the winner of Nadal/Krygios. Nadal might have to beat Krygios, Thiem and Medvedev to make the final again, yowza.

An amplification of what I was saying last night about Fed's opponents here, quite the draw:

Huh, they are talking about the coaching thing, it will be legal in all other tournaments but still banned in Slams, a little strange but I guess kind of a test.

jon abbey said:
Huh, they are talking about the coaching thing, it will be legal in all other tournaments but still banned in Slams, a little strange but I guess kind of a test.
Click to expand...

For the WTA only. Not the ATP.

Yes, sorry, I said that above.

Wawrinka/Medvedev in war #2 of the day on the men's side, Stan up a set 6-2 quickly.

Muguruza is up a set and a break on Bertens.

Mr. Wednesday said:
Muguruza is up a set and a break on Bertens.
Click to expand...

Yup, really outstanding play from Gabby. Bertens played well, and had no chance. Muguruza fits the above discussion. It is baffling that Wozniaki (who I love), has 30 career titles and Muguruza has 7. Caroline was one of the great grinders of her generation. At her peak she almost never lost to an outside the top 10 player, but really struggled against the other elite players, which allowed her to pile up the second tier titles. Muguruza's A game is a level, maybe a couple levels above where Wozniaki's was, but her B and C game is well below where Woz' was

Ooh, Coco is still in the doubles with McNally, they just started their round of 16/3rd round match against a Japanese team.

Medvedev came back and won sets 2/3 easily but Stan is battling again in the 4th, 4-3 on serve.

jon abbey said:
Huh, they are talking about the coaching thing, it will be legal in all other tournaments but still banned in Slams, a little strange but I guess kind of a test.
Click to expand...

yeah, the ITF (which runs the slams but not the rest of the tour) has always been behind the tours themselves when it comes to evolving their rules and processes.

If the WTA ran their side of the slams, the matches would be best-of-5 from at least the R16 if not the entire thing, for example.

BigMike said:
Yup, really outstanding play from Gabby. Bertens played well, and had no chance. Muguruza fits the above discussion. It is baffling that Wozniaki (who I love), has 30 career titles and Muguruza has 7. Caroline was one of the great grinders of her generation. At her peak she almost never lost to an outside the top 10 player, but really struggled against the other elite players, which allowed her to pile up the second tier titles. Muguruza's A game is a level, maybe a couple levels above where Wozniaki's was, but her B and C game is well below where Woz' was
Click to expand...

This is well said. Muguruza's is a power game, good enough to win grand slams on her best weeks, but also massively inconsistent - in a very similar way to how Serena looks when she's really off. Serena's greatest gift might be her mental abilities to adjust mid-match when she doesn't have her best stuff, and figure out how to turn things around. She didn't do it the other night, but it's a major difference between her and pretty much the rest of the power-groundstrokes field.

Also, Garbi coming up reminds me that she won her second slam at 2017 Wimbledon, beating Venus Williams. It boggles my mind that Venus was able to reach not one but TWO grand slam finals in 2017, after not having reached one since 2009 (and only making one semi in the interim). What could she have done in her 30s if not for that auto-immune disorder?

edit: and Stan flips a switch, wins the 4th set tiebreak and just dominates the 5th. Brilliant execution by him. Time to call it a night.

Yeah, superb effort from Stan, Medvedev I thought got too passive but Stan played great.

It’s crazy to me Stan plays with those heavy watches on. Rafa’s at least weighs less than a wrist band.

Nadal/Krygios has been as much fun as one could have hoped. Nadal has mostly served incredibly all match, one weak game in the second set was the only break point he faced in his first 19 service games, but then serving for the match at 5-4 in the 4th, Krygios just broke him, 5-5 now.

Sigh, Krygios game is still better than his head

He kept it together pretty well this tournament but that missed drop shot was heartbreaking.

Federer vs Sandgren slated as starting at 10:30 ET tonight. Looking forward to it, even if it's a straight-set stomping.

Kenin against Jabeur now in the first women's quarter on the Tennis Channel. Jabeur is the first woman of Arab descent to ever make a Grand Slam quarter (she's Tunisian), she's also the one who ended Wozniacki's career a few matches ago. Kenin is up a set but it's a close, fun match, two smart players who get very frustrated with themselves when they're not perfect (and occasionally when they are)

Also Gauff/McNally came back from a set and a break down in women's doubles last night and knocked out the #10 seeds. They are a round behind in the draw so play again today in the quarters against the #2 seeds Babos/Mladenovic.

Kenin through in straight sets, 4 and 4.

Mr. Wednesday said:
Kenin through in straight sets, 4 and 4.
Click to expand...

She’s up to #11 in the rankings now, another win would put her in the top 10. She gets the winner of Barty/Kvitova in the semis, playing now (on ESPN News).

How long's it been since Australia had one of their own who was favored to win their home slam? Hewitt? I didn't know until last week that Barty is ranked #1 right now, but man the crowd there is INTO IT, and sold out.

I also love how fast they're both playing, none of this draw-it-out stuff, get the ball, serve it.

Very close match so far, lots of break points saved on both sides. Unbelievable D by Barty on that last point, bringing the tiebreak back to 3-3.

6-6 in the tiebreak now. All set it has looked like one player is about to take charge and then the other one flips it.

jon abbey said:
Barty is #1 but not favored to win this match, Kvitova crushed her here last year in the quarters, 6-1, 6-4 in 50 minutes.

Very close match so far, lots of break points saved on both sides. Unbelievable D by Barty on that last point, bringing the tiebreak back to 3-3.
Click to expand...

Barty came into the match a slight favorite, around -130 or so.

That 2-3 point in the first set tiebreak seems to have taken the fight out of Kvitova, she hit seeming winner after winner and they just kept coming back somehow. Really unbelievable defense.

Rennae Stubbs with some of the best tennis analysis I can recall hearing as to how Barty was positioning herself for Kvitova's returns, had learned from her past matches, and Kvitova just didn't respond but kept doing what Barty expected. Their production team really queued up some on-point clips, that was well done.

Time to do a bit of work until Federer's match actually starts.

edit: and quickly down 2-0 in the 3rd. His forehands really look off-balance. Tons of errors. I feel like I'm watching Kyrgios, not Federer.
Last edited: Jan 28, 2020

Yeah unfortunately there may not be much left int he tank. Sandgren was AWFUL in the first set, and even then Roger had trouble putting it away. After getting broken, Roger had a chance to break back up 0-40, and lost 5 straight points

He got a warning during the game for apparently cursing. Fed is now off court in a medical timeout

I like her style, she had a job to do and did it unapologetically. Roger was really close to the line on making a much bigger deal of things when he kinda stared down and gave a talking-to towards that line judge who called him on the expletive.

Anyway, the answer to my question, "WTF?", appears to be "A groin injury". I hope a little rubdown will let him finish out the match in-form, but early returns are somewhat mixed.
You must log in or register to reply here.
Share:
Twitter Reddit Pinterest Tumblr WhatsApp Email Link
Top Bottom