Auditioned for North American game in OHL, rather than in Russia to illustrate game and commitment.

Hockey Prospectus Profile (interestingly, they list him as the number 1 Bruins prospect).

The Good: Alexander Khokhlachev came over from Russia this season and helped his stock tremendously. He has true plus puck skills with very notable hand-eye coordination that allows him to stick-handle very well with displays of unique creativity. His passing skills also range in the above-average to plus variety, as his vision with the puck is great and his passes are generally crisp and on target. His skating tool has pluses and minuses on one hand he has above-average agility and a good first step that allow him to be pretty elusive, but the top speed barely touches pro level.

The Bad: Alex can at times be a victim of overpassing instead of taking the shooting lane, which is unfortunate as his shot is actually quite solid. Khokhlachev does exert notable work ethic defensively and in the crease area, but he's just nowhere near an average physical game with a very immature body and he gets pushed around too easily. Khokhlachev has a true top skill set, but the physical game will impede him going forward.

Projection: An average first-line center in a perfect world, and there's too much talent to not be an above average second line player if the development doesn't go as planned.
Click to expand... 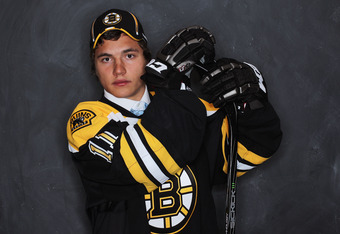 Much as I'm looking forward to the development of Knight and Hamilton, in my mind there's no question that Khokhlachev has the highest upside among Bruins prospects. He has two more full seasons to go back and improve on his numbers in the OHL, hopefully making the big squad by 2013-14. Oh, and

On second-round Russian import Alexander Khokhlachev: “Again, very skilled. He arrived in not the greatest shape but I know he’s going to take care of that as the year progresses, as the summer progresses.”
Click to expand...

Khokhlachev is off to a great start with 2g and 5a in his first 4 games. Had a sweet dish to set up one goal today and capped off the comeback with a beautiful breakaway goal in OT. Video can be found here.

This should update automatically every few days to a week.

He's gotten lost a bit this year amidst the Hamilton-Spooner-Knight prospect love, but Khokhlachev quietly put together a 8-11-19 month of November with points in all 11 games he played in, plus a goal in the one game of the OHL-Russia Subway Super Series in which he participated. Another goal tonight gives him points in 12 straight (9-11-20, +7 in his last 12). His 13-24-37 totals have him currently tied for 9th in the OHL in scoring; his 24 assists are tied for 6th. The only player his age or younger ahead of him in scoring is consensus 2012 top-2 pick Nail Yakupov; the player he is tied with is Sean Monahan, considered a probable top-5 pick in the 2013 draft.. He is also expected to play for Russia in the World Junior Championships.

If he were a week younger, I think he'd have a shot at going in the top 10 in the 2012 draft; it' looking more and more like Chiarelli really stole him in the second round.

Koko out for year with bizarre injury.
http://www.windsorstar.com/sports/Khokhlachev+season/6250552/story.html

Potentially very bad news coming out of the Khoklachev camp.....

Kirk Luedeke &rlm;@kluedeke29
Just heard from a vg source that the Bruins just need to submit a solid offer to Koko to retain his rights past June 1, 2013 deadline...

Kirk Luedeke &rlm;@kluedeke29
Even if he does not accept/sign and ends up in KHL, B's do not lose him and I believe just list him on reserve- keep rights for 4 yrs

Kirk Luedeke &rlm;@kluedeke29
Bottom line with Khokhlachev: No decision made yet, but Bruins' equities are protected if he opts for KHL...for now.
T

Dom Tiano thinks it isn't terrible news for the B's.

Dominic Tiano &rlm;@dominictiano
IMO #Bruins fans need not worry about Koko going to KHL. He did say back in 2010 that his goal is the NHL but he would like to 1 day play...

Dominic Tiano &rlm;@dominictiano
...for Spartak in KHL. Better now than 3, 4 years from now. This could be good for his development

Dominic Tiano &rlm;@dominictiano
Under current CBA #Bruins do have an option to pay Koko a salary while he's in the OHL, but it's peanuts compared to what he'd get in KHL

Dominic Tiano &rlm;@dominictiano
I believe the max Bruins can pay Koko while in OHL is $15,000 per year. Versus millions he'd make in the KHL, not even worth considering

Rumor has it Koko is back in the OHL with Windsor.

Sean Lafortune &rlm;@SeanLafortune
Sounds like Alexander Khoklachev is back in Windsor after spending some time in the KHL this year. Bit of a surprise.

If true, Koko's abbreviated KHL career was 12 games, 1 goal, 0 assists, 6 PIM, -5. That seems to indicate he wasn't quite ready to play with the big boys.

Fine by me. A short stay in Mother Russia indicates pretty clearly that his intentions are in fact to play here.

admired by a gingie

cshea said:
Rumor has it Koko is back in the OHL with Windsor.

nice goal in the QJMHL/Russia series. Krassnaya, as they say.

FriedgeHNIC: Khokhlachev takes Ceci slapper in face, diving to block shot. Helped off ice, but under own power.

sunayas: Alex Khokhlachev has been taken to hospital along with the lone Russian translator the team has.

FriedgeHNIC: For Bruins fans, we were told Khokhlachev is ok.
Click to expand...

Khokhlachev back to Windsor.
S

&ldquo;It&rsquo;s different game on big ice,&rdquo; Khokhlachev said. &ldquo;I think I learn a lot in KHL. A lot of older guys on team and I learn from them and I think (coming back to OHL) it will something (to make) me to be better.&rdquo;

While he felt he was learning in the KHL, Khokhlachev said it was the Bruins that pushed the issue for him to return to North America.

&ldquo;I have contract with Boston and Boston told me I have to come back,&rdquo; Khokhlachev said. &ldquo;I come play in Windsor and play hard there. It&rsquo;s a really good experience to play in (KHL), but I come back to Canada and play North American style on smaller ice (rinks).&rdquo;
Click to expand...

He's picking up where he left off in Windsor. 6 games, 5 goals and 5 assists.

Khokhlachev's junior career came to an end today with Windsor's final game of the season. Totals: 22-26-48 in 29 games; had he played the whole season in Windsor, he would have challenged for the OHL scoring title. He is expected to join Providence this week on an ATO contract as they prepare for the playoffs (the P-Bruins will end the day just 1-point behind Syracuse for the 1-seed in the East and the top record in the AHL).

Khokhlachev will make his debut for Providence tonight wearing #13

Khokhlachev scored his first 2 goals in the AHL over the weekend; through 7 games with Providence he's at 2-1-3, +1 and seems to be adjusting fine to the pro game this side of the Atlantic.

Koko was named the AHL player of the week coming off a 3-6=9 weekend. He's got a line of 18g, 28a in 51 games. Providence's leading scorer, though Spooner's per game pace is slightly higher than Koko.

cshea said:
Koko was named the AHL player of the week coming off a 3-6=9 weekend. He's got a line of 18g, 28a in 51 games. Providence's leading scorer, though Spooner's per game pace is slightly higher than Koko.
Click to expand...

His scoring pace has vastly improved though, as he is showing adaptation to the AHL game through his first season.