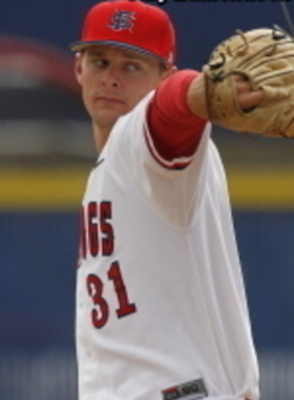 June 5 - Haley went 7-4 during his junior year with Fresno State, recording a 3.18 ERA with a team-leading 94 strikeouts. The 20-year-old right-hander had been drafted by the Cleveland Indians in the 46th round of the 2010 MLB draft by the Indians out of Sierra College, but has improved his draft stock since transferring to Fresno State. The Sacramento, Calif., native caught the attention of many scouts after pitching a perfect 3 1/3 innings of relief against then-No. 1 Stanford earlier this season. He features a 91-94 mph fastball, along with a changeup and a decent breaking ball.

July 28 - To date, Justin Haley has submitted the most dominant performance by any Red Sox draftee in the team’s 2012 class. The big, physical, 6-foot-5 right-hander threw three shutout innings, allowing one hit, walking none and striking out six. In his last five outings, he’s thrown 12 1/3 innings without giving up an earned run. On the year, he has 17 strikeouts and eight walks in 14 1/3 innings; opponents are hitting .089 against him.

August 7 - Sixth-rounder Justin Haley continued his dominant pro debut, tossing three more shutout innings while permitting two hits, walking none and striking out two. He recorded six of his nine outs via groundball. He’s allowed two runs in 20 1/3 innings, a 0.89 ERA, while punching out 19 and walking nine. Part of the reason for his low ERA? While his .134 batting average against is impressive enough, opponents are hitting just .040 against him with runners on base.

April 6 - Right-hander Justin Haley recorded all 11 of his outs via strikeout or groundball, punching out six and getting five groundball outs (one a double play). (For those who note that such a total would typically yield 12 outs — one of Haley’s strikeout victims reached on a wild pitch.) He allowed one unearned run on two hits, though he did permit four walks, helping to elevate his pitch count to the point where he could not make it through four frames.

One can make a case that the big right-hander has the most unusual delivery in the system due to an unusual quirk — after he releases the ball, he licks his hand.

April 21 - Right-hander Justin Haley had his best outing of the young season. The 21-year-old, taken in the sixth round of last year’s draft, had been struggling with his command (16 walks in 10 1/3 innings), but on Saturday, he stayed in the strike zone and once again proved a difficult pitcher to square up. He gave up one run on two hits and a season-low one walk while striking out six, allowing him to work a season-high five innings in his fourth start. Haley has given up two or fewer hits in each of his four starts, with opponents hitting just .125 against him.

May 3 - Right-hander Justin Haley continued to struggle with his command in his first full pro season. In three innings of work, he gave up five runs on three hits and three walks while striking out four. In 22 innings this year, he’s now punched out 24 and walked 22. While an intriguing arm, the 21-year-old — a sixth-rounder last year — is 0-4 with a 6.14 ERA to date.

May 15 - Right-hander Justin Haley, making his first appearance out of the bullpen after six starts, gave up three runs — all unearned — on two hits and two walks in 2 2/3 innings. He recorded all eight of his eights either by groundball (six) or strikeout (2) in what represented one of his better outings of the year for the 2012 sixth-rounder. He was in line for the win, having not given up any runs, when he left a bases-loaded, one-out, ninth-inning situation to another reliever, but a walk-off, three-run error on a dropped fly ball ended up saddling Haley with his sixth loss of the year and the three unearned runs.

May 20 - Right-hander Justin Haley matched a season-high with six strikeouts in 3 1/3 innings as a piggyback starter behind Austin Maddox. In two long relief outings since being moved into the piggyback role, Haley has allowed one run in six innings (1.50 ERA) while striking out eight and walking four. Those numbers compare favorably to the 21-year-old’s work in six starts preceding that, when he had a 6.66 ERA, 27 strikeouts and 28 walks in 25 2/3 innings.

May 25 - After a pair of relief outings, Justin Haley returned to the rotation with his best start of the year. The 21-year-old right-hander allowed one earned run, punched out eight and walked two in five innings. He has 14 strikeouts and four walks in his last 8 1/3 innings. Though he’s endured severe command woes at times, his stuff is interesting, as evidenced by his 10.6 punchouts per nine this year.

June 25 - Right-hander Justin Haley had some control struggles, walking four batters in five innings and throwing just 47 of 98 pitches for strikes, but the 22-year-old (a 2012 sixth-rounder) still allowed just one run on two hits. In his last five starts, he has a 2.83 ERA with 28 punchouts and 13 walks in 28 2/3 innings.

August 4 - Right-hander Justin Haley tossed six innings in which he allowed two runs on three hits and three walks while matching a season-high with eight punchouts. After his early-season struggles that resulted in a move to the bullpen, Haley has been tremendous over a 12-start stretch. The 2012 sixth-rounder has a 2.74 ERA with a .216/.323/.288 line, 58 strikeouts and 36 walks in his last 65 2/3 innings. Control has remained something of an issue, but he’s made huge strides during this run in which he’s walked 4.9 per nine innings as compared to his first seven starts of the year, in which he walked 9.7 per nine innings with a 6.58 ERA.

The right-hander, who was drafted in the sixth round in 2012, has been dominant in his last four starts, allowing just four earned runs in his last 26 innings. In those four outings, the opposition is batting just .136/.183/.227 against him. Haley has posted a 2.31 ERA since May 14, and has a 3.36 ERA in 23 games (21 starts) this season for Greenville. He has had trouble with walks, however. Haley’s walked almost six batters per nine innings over the course of the season, but has cut that number down to two batters in nine innings over his last five outings.

August 22 - Justin Haley‘s streak of 14 straight starts without permitting more than three earned runs came to a halt, as the right-hander was roughed up for six runs on seven hits (two homers, a triple and four singles) in five innings. The 22-year-old did, however, punch out seven and walk just one, giving him 28 strikeouts and just five walks over 25 innings in his last four starts. The two homers were one more than the deceptive right-hander had permitted in his prior 11 outings (spanning 61 2/3 innings).

Another great breakdown from Alex Speier:


– Though right-hander Justin Haley allowed five runs in five innings, only one was earned, as the 22-year-old dropped his ERA to 3.61 for the year and 2.77 in 12 starts since the All-Star break. Haley has quietly had a very interesting year from a prospect standpoint. Hitters simply don’t seem to pick up the ball well out of his hand, resulting not just in solid strikeout numbers (8.8 per nine innings) but also a dearth of solid contact, as suggested by a .219 opponents’ batting average that ranks as the 27th lowest mark among all pitchers in full-season affiliates this year. While the 2012 sixth-rounder endured woeful command struggles at the start of the year, he’s made steady gains in that area throughout the season. He punched out four and walked just one on Monday, and he’s now recorded four straight starts of one or no walks.

His breakdown by month:

August clearly represents something of a breakthrough, but the overall trend lines for the year are promising, suggesting that the pitcher has improved as he’s progressed through his first full pro season.

Rough outing for Justin in the opener of yesterday's doubleheader at Savannah. He bookended the first inning with strikeouts, but in between came a double, an ROE, a run-scoring balk, a walk, and a 2-run double -- 3 runs in all. Haley yielded another run in the 3rd.

Justin Haley, used this year at Salem as mostly a "Piggyback" starter, was used to start the game 5/16, because of a double header vs the Carolina Mudcats.

He lowered his ERA on the season to 1.82, and in 34.2 IP has 30 K's, 12 BB, and allowed 26 Hits.  The concern about Haley was his ablilty to throw strikes.  Last year, in his first full season in pro-ball, at Greenville, he averaged 6 BB/9 over 125 IP.  This year Haley seems to have made huge improvements.  He'll turn 23 next month, and if he continues to limit his walks, he's someone to watch, and possibly earn a promotion to Portland before the end of the season.

Edit: Wanted to add that with Haley coming on strong, the Salem Red Sox have a very intriguing pitching staff.  Along with Corey Littrell (who pitched 6 innings of shutout ball in the first game of last night's DH), Simon Mercedes, Pat Light and "my adoptee" Cody Kukuk, there's a lot to follow.

Haley was promoted to AA Portland.

Are we looking at a potential starter or Is he more likely a middle reliver?

Haley threw three scoreless innings as the PawSox starter yesterday. He ended up with a no decision.

OptimusPapi said:
Are we looking at a potential starter or Is he more likely a middle reliver?
Click to expand...

Looks like they decided to use him as a starter.

Haley made his Pawtucket debut yesterday.

He didn't debut in March?

Nice to have another capable looking starter to keep eyes on though.

Justin was sent back to the Red Sox by the Twins. Pawtucket will be using him as a starter.

From Speier's notes: MINOR DETAILS: In Triple A Pawtucket, righthander Justin Haley continued to excel in his re-entry into the Red Sox organization following his return as a Rule 5 selection of the Twins. The righthander set a professional high with 10 strikeouts and walked none over 6 2/3 innings in which he allowed three runs on five hits. In three starts for the PawSox, Haley now has a 2.29 ERA with 16 strikeouts and one walk in 19 2/3 innings.
You must log in or register to reply here.
Share:
Twitter Reddit Pinterest Tumblr WhatsApp Email Link
Top Bottom