Gregg Marshall under investigation by Wichita State for allegations of misconduct

Both the athletic and stadium have long investigative pieces out about this.

School officials have interviewed players on the current team, as well as former players about their experiences inside the program, and although Wichita State officials declined comment, citing privacy laws, Marshall wrote in a text message to The Athletic: “I’m aware the university conducted interviews and I fully participated in the process. I look forward to having it wrapped up as I continue to focus my energy on our team.”

The investigation comes after the Shockers experienced an exodus last spring with six scholarship players plus a walk-on transferring. In addition, 2020 commit Ja’Dun Michael asked out of his letter of intent. One source said a player voiced concerns about Marshall’s behavior to university administrators before transferring.

The most damning allegations are from the 2015-16 season. They include:

• During a practice that season, Shaq Morris attempted to block teammate Zach Brown’s shot. Brown fell awkwardly on the play, and Marshall rushed over and began chewing out Morris for what he deemed a dirty play and then shoved Morris in the back, according to multiple players who witnessed the incident.

Marshall told Morris to “get the fuck out of practice” and then followed him out of the practice gym, two players said. Before Morris could exit the double doors of the gym, Marshall ran up behind Morris and punched Morris between the shoulders near his neck, according to the players. An assistant coach intervened.

Morris did not respond to a text message seeking comment for this story.

• In the preseason that year, a staff member was working out a group of players and Marshall was not pleased with the session. Marshall approached the staff member and started berating him, then put one of his hands around his neck, according to two people who were present.

• In the spring of 2016, in an incident widely discussed in the athletic department, Marshall was approaching his parking spot outside of his office at Koch Arena and a student-athlete from another sport was pulling out of Marshall’s spot. It was a regular occurrence for students to park in Marshall’s spot to run in quickly to the tutoring center. If Marshall discovered someone parked in his spot, he would typically double park behind the car. As Marshall approached his spot that day, he did not get there fast enough to block the student in. Instead, Marshall quickly turned his car around and followed the student’s car, eventually blocking his car at an intersection in the parking lot. According to an eyewitness, Marshall got out of his car and started yelling at the student, asking “Do you know who the fuck I am?”

The student had his window down and responded, “I don’t give a fuck who you are.” Marshall approached the car and, according to the eyewitness, attempted to punch the student through the driver’s window.
Click to expand...

Gregg Marshall under investigation by Wichita State for allegations of misconduct
https://theathletic.com/2123302/2020/10/08/gregg-marshall-under-investigation-by-wichita-state-for-allegations-of-misconduct/?source=user_shared_article

The incidents involving Morris and Lindsted were part of numerous allegations of physical and verbal abuse by Marshall against members of the Wichita State’s program, more than 30 former and current members of the basketball program told Stadium.

Marshall routinely physically and verbally abused members of the program and demeaned his players with ethnic and racial slurs, sources said.

Upon learning of Stadium’s reporting, Wichita State initiated an investigation into Marshall last month, hiring Tueth Keeney out of St. Louis, sources told Stadium. Several players – including Morris – told Stadium they had been contacted by the law firm.

Among the allegations Stadium uncovered:

* Marshall punched Morris in the head during a practice in October of 2015.

“I love my teammates, the city and Wichita State,” said Morris, who played at Wichita State from 2014-18. “But if I could go back to that day when he punched me, I would have left.”

* Marshall choked Lindsted, then a Shockers assistant coach, at a practice during the 2016-17 season, sources said. Lindsted, now an assistant at Minnesota, declined comment.

* Marshall taunted junior forward Isaiah Poor Bear-Chandler, who is of Native American descent, “to get back on his horse” and made “Indian howling noises” while in practice during the 2018-19 season.

* Marshall body-shamed a former player by lifting his shirt up during a practice in the 2015-16 season, grabbing the player’s stomach and then mocking the player’s girth.

Of the 36 players and coaches Stadium interviewed, only Morris and former Wichita State guard Ty Taylor agreed to be identified for this report. The remaining individuals, who corroborated the allegations against Marshall, said they feared retribution and possible community backlash because of Marshall’s support and power in Wichita.
Click to expand... 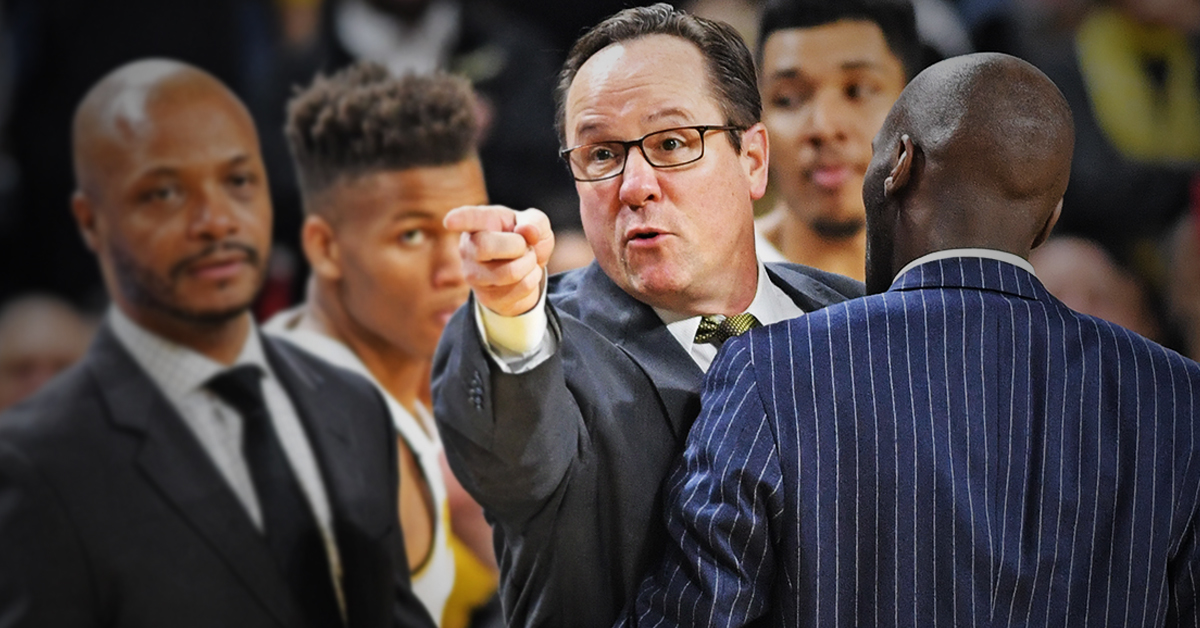 Wichita State forward Shaq Morris told Stadium that he was punched twice by coach Gregg Marshall during a 2015 practice. Marshall also allegedly choked
watchstadium.com
More at each of the links.

No wonder Ted Lasso had to leave Wichita...

Anyone that ever uses any variation of "Do you know who the fuck I am?" should be immediately fired.

Yea. This is not a surprise to anyone. It’s no secret he’s got serious issues.

DJnVa said:
Anyone that ever uses any variation of "Do you know who the fuck I am?" should be immediately fired.
Click to expand...

Less observant than others

from the wilds of western ma

From his WIKI, he doesn't appear to have ever worked for Bob Knight. Maybe he just idolizes him.

I think this definitively establishes that anyone named “Gregg” should not be allowed to coach sports at any level.

OurF'ingCity said:
I think this definitively establishes that anyone named “Gregg” should not be allowed to coach sports at any level.
Click to expand...

What did the fine citizens of San Antonio ever do to you?

Does Wichita not have towing companies in the city?

The student had his window down and responded, “I don’t give a fuck who you are.”
Click to expand...

Lose Remerswaal said:
What did the fine citizens of San Antonio ever do to you?
Click to expand...

Forgot he was 2 Gs. Well, the exception that proves the rule and all that.

If he cannot answer that with an unequivocal "no" then he should be gone.