He's no longer a Red Sox, but he's still my favorite player in baseball. Different board, same purpose - let's talk about how great Mookie is (for as long as he continues to be great, and then even when he's not).

Mookie's current 2020 stats:
I mean, what a start for the Dodgers. Because of this screwball season, it's hard to compare what he's done over the first month of the season to his previous best monthly splits, but here are his previous top-5 months ever by wRC+:
Despite the torrid start, his EV is below his historical highs and he's once again underperforming against lefties (SSS and all that, but his EV and hard-hit % against lefties are both down). Though the sample is small, Mookie seems to get good grades on defense (measured by dWAR, OAA, etc) and his sprint speed is still close to his historical average (27.7 ft/s versus 27.9, 27.9, 28.1, 27.9 in previous seasons, 77.5% rank in the league).

Jay Jaffe has him on the path to the Hall: 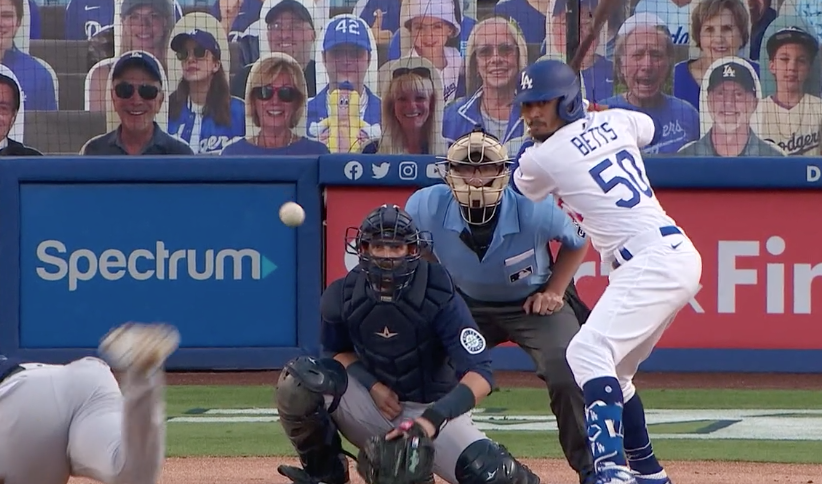 Mookie Betts Is Building a Case for Cooperstown

Coming in to today’s game, Mookie has seen 210 pitches in the strike zone. He has swung and missed only three times.

This weekend my 10 year old daughter said I can’t believe the Red Sox traded Mookie Betts! Why did they do that? I had a hard time explaining it. Man I miss seeing him in a Boston uniform.

Danny_Darwin said:
Jay Jaffe has him on the path to the Hall:

Mookie Betts Is Building a Case for Cooperstown

At this point I think Mookie would have to have a borderline catastrophic injury or other major issue to not make the Hall of Fame, even if his production trails off as he approaches and passes age 30.

OurF'ingCity said:
At this point I think Mookie would have to have a borderline catastrophic injury or other major issue to not make the Hall of Fame, even if his production trails off as he approaches and passes age 30.
Click to expand...

And he would go in as a Dodger

Yes. I think MB's stand yesterday was his greatest feat yet. Good for him!

Ninth-inning, game-tying home run, and his teammates reacted as if it was spring training.

Are the Dodgers in "fuck it" mode at this point and just having fun? Or looking to get everyone some time at every possible position in preparation for the post-season?

maybe not re: fuck mode.

Dave Roberts has Mookie on his dynasty team and is craving some of that sweet sweet 2B eligibility next season.

Sorry, but that sounds like a great way to get your multi-hundred million dollar investment hurt. All he needs is one Machado incident...