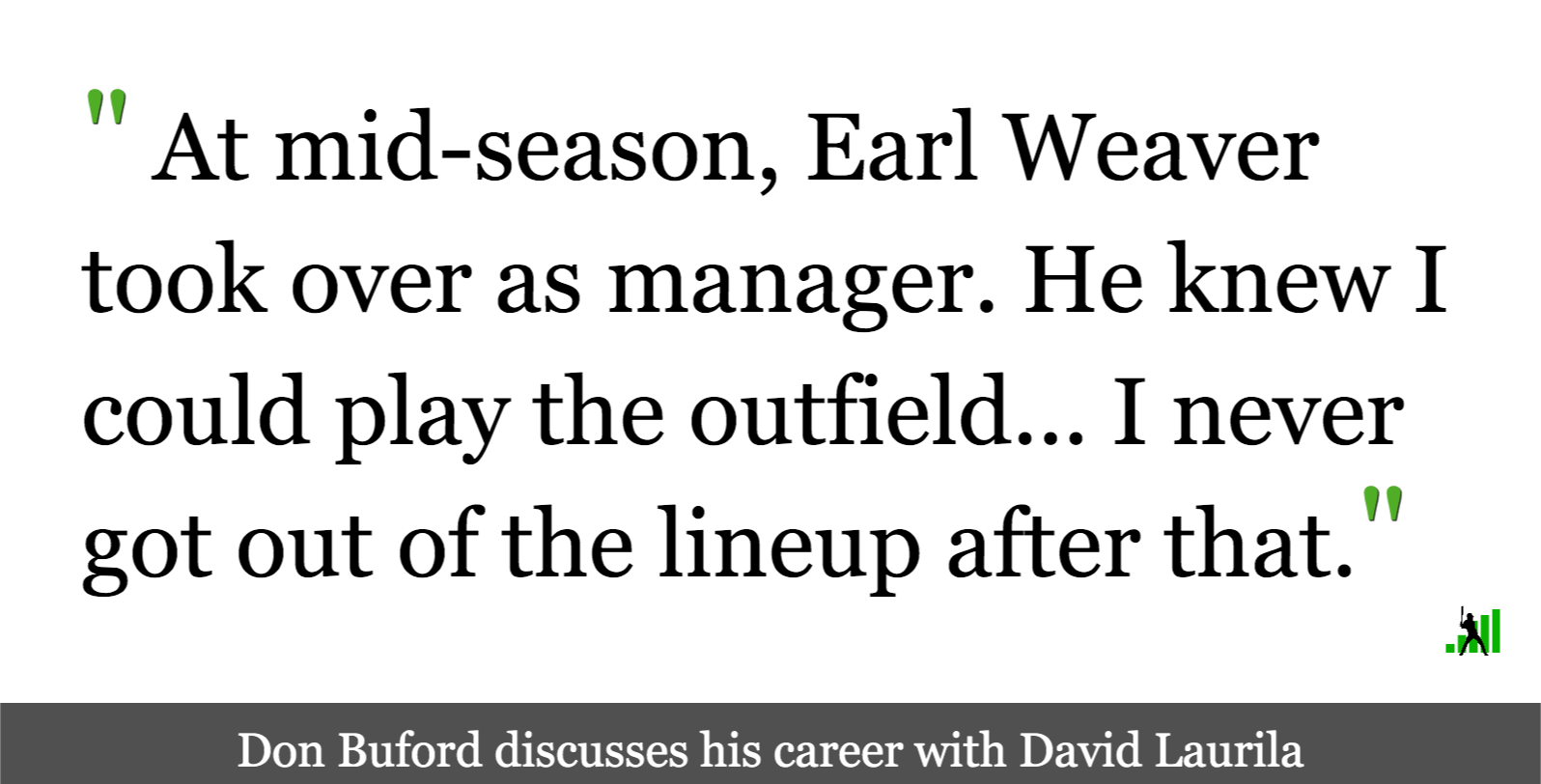 Overshadowed throughout most of his career, Buford excelled for top-notch teams in the 1960 and early 1970s.

Laurila: Getting on base was one of your strengths. One of your managers in Chicago had been known for that in his playing days. What do you remember about playing for Eddie Stanky?

Buford: “Starting out, he said that if I could steal 20 bases he’d buy me a pair of alligator shoes. I told him, ‘I’ll steal 20 bases before halfway through the season.’ True enough, I did that. I said to him, ‘Hey, I’ll steal you another 20, but you’ll have to buy me a suit.’ He said, ‘Yeah, I’ll buy you a suit if you steal another 20.’ I ended up with 51 on the season, so I got alligator shoes and a suit from Eddie Stanky.”
Click to expand...

The safest place in the U.S., except for the occas

Hope you and yours are doing well.

When I worked for the Frederick Keys, Buford was a minor league instructor for the Orioles so he was at many of our games. The year Damon Burford was with the Sox I spoke with Don frequently. I would tell Don if Damon got any hits that night and he would always ask me about Trot Nixon, who he felt was way overrated and was blocking Damon from playing time on reputation alone. He really didn't care for Trot!

Don was always cool with me. Nice guy.

In early January of '86, my uncle took my cousin and (15 year old) me to the playoff game between the Patriots and the Raiders at the LA Coliseum. This was the playoff run of the Pats' first Super Bowl appearance (got smoked 46-10 against the Bears).

We stayed at the Hilton - right down the street from the Coliseum and close to the USC Campus.

While walking / driving around, we saw the USC baseball team practicing. Although we were there for an NFL Game - the baseball junkie in each of us just had to get out to watch baseball being played merely a few days after the ball dropped at Times Square in Spring-like weather.

While sitting right near the batters box of USC's field...an African-American man - obviously a coach via his attire and stern voice that shouted soft-directives at the young roster working out in front of us - came over and randomly exchanged pleasantries, asked who we were, and where we were from ("Red Sox fans?" was a follow-up question).

After 60-90 seconds of pleasant chatter - my uncle (a baseball junkie like any one of us on this board) recognized him with a fairly decent degree of confidence and asked "are you Don Buford?" (remember kids...smart phones weren't in your hands these days...and you couldn't look up the roster and coaches on-demand with the help of the nearest cell-tower). "I am", was the reply...and for the next hour...he and my uncle talked about the great Orioles Teams that he played for and what he was doing post-retirement.

He was a perfect gentleman...talked about how he loved what he was doing...and how much he loved the USC Program (having played there under the leadership of the great Rod Dedeaux). I don't know how many of them exist, but I'm guessing that Buford is one of a small number of individuals that has been a part of both an NCAA Champion Baseball Team and a World Series Champion.

In any case, seemed like a great guy...who has contributed much to the game via himself and his offspring.

What a fun read. Love the Ed Runge story.
P

"They weren’t renting apartments to African Americans. I ended up staying with a family. The lady’s name was Miss Botts. She was the representative of Aunt Jemima Pancakes. She had a basement apartment and I stayed in her home."