2-1 Ukraine off a corner. So frustrating.

Durkin's passes are just slow today for some reason.

It's like the grass is an inch taller for him than the other folks.

It's like the grass is an inch taller for him than the other folks.
Click to expand...

Yup. If we aren't getting a strong performance from him in that department, there's no reason to start him over Cerrillo, who brings more defensively.

Edit: not a good quality replay, but the defender may have gotten enough of the ball
Last edited: May 24, 2019

The US showed some quality, but defensive mistakes cost them. Ukraine is really good at their game plan and were very hard to break down.

I felt that Ramos showed Ukraine too much respect with the lineup. I think the US would have been better off with Pomykal in the middle, next to Mendez. Pomykal is so good on both sides of the ball in the middle that he's wasted on the wing. If defensive bite is a concern, use the stouter Edwin Cerrillo instead of Durkin.

In any case, Dest was shaky defensively, especially in the first half, and was responsible for the first goal. Durkin had a shocker all around. Konrad looked dangerous, but we couldn't get someone on the end of his service. Mendez has an amazing left foot, but he will eventually need to tighten up his defensive work rate and off the ball movement. Weah was a bit off the pace and didn't stand out as the one guy who has already gotten USMNT caps.

The team can definitely bounce back, but the pressure is on now.

Just catching up on the game. This was all Ramos. What a craptastic job today.

As TB notes, the line up was too conservative. There was no one able to consistently provide balls in quality spaces for the attack. It was like 7 defenders and 3 attackers at times.

Worse still, Ukraine grew into the match while Ramos’s subs were ineffectual and his adjustments really didn’t make a difference. I was intrigued when Weah went wide and Pom dropped into a false 9 kind of role, but they need to commit to that style if they’re gonna do it. This is a young squad facing a well drilled, compact defensive unit. If Pom is going to seek out the half spaces and get something going, the rest of the boys need to circulate the ball with some purpose to get those spaces to open up regularly. It didn’t seem like the side had practiced the formation enough to make a go of it against quality competition.

Usually, I’d say it’s not so bad for youth teams to taste a few loses like this - outplay the opponent, but still manage to lose. But I don’t think this match was given away due to a lack of focus or effort. It was the managing. Blecht.
Last edited: May 24, 2019 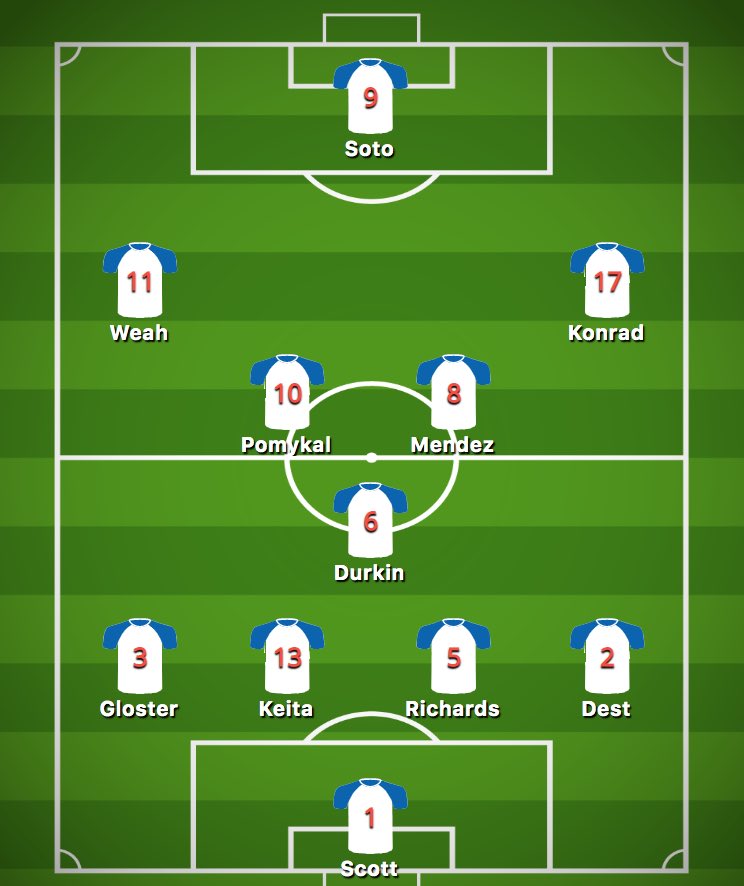 I'm a little surprised to see Durkin get the nod after having such a nightmare against Ukraine.

Gloster is back in the lineup after leaving the last game with an injury. No McKenzie yet; Keita starts again.

There was some thought that Araujo would get a chance at RB after Dest's defensive miscues, but that has not come to pass.

Is this a game the US can get a good result? Exactly how much do you know about Nigeria's U20s????

DrewDawg said:
Is this a game the US can get a good result? Exactly how much do you know about Nigeria's U20s????
Click to expand...

You never really know who is good at the U20s.

Titans Bastard said:
You never really know who is good at the U20s.
Click to expand...

No, I know. But from watching the first 11 minutes, it's safe to say that any result is possible today.

Edit: what a weak yellow

The US looks better from the run of play, like they did for most of the game against Ukraine. Nigeria isn't doing Ukraine's pure bunker-and-counter strategy, which I think helps the US. Breaking down Ukraine's defense was really hard.

US could still get burned on the counter though.

Ooh, Mendez's deflected shot caroms off the crossbar. He is so dangerous with his left from outside the box.

frantically trying to find a stream...

GOAL! 1-0, Soto finishes off a Mendez corner at close range with a thumping header.

Holy crap, what a pass from Mendez to Weah. Wow.

Ref swallowing his whistle now. Easy yellow on a foul on Pomykal, but no card.

edit: only the FS1 link works, but it only takes one.

Titans Bastard said:
Ref swallowing his whistle now. Easy yellow on a foul on Pomykal, but no card.
Click to expand...

Especially after the yellow he gave de la Fuente earlier.

A US goal after a post-corner scramble is called off.

I don't really understand why but the US players are taking it well enough that there was probably a valid reason.

Plobbably the greatest videographer ever

Titans Bastard said:
A US goal after a post-corner scramble is called off.

I don't really understand why but the US players are taking it well enough that there was probably a valid reason.
Click to expand...

I think Weah was offside on the initial ball in.

Edit: And there's the replay showing it

Great save by Scott.

Now Nigeria off the crossbar. US back on their heels a bit now.

It seems like the US is pretty insistent on using that sort of D-mid even though we’ve got a Tyler Adams, so I hope he develops.

US settled back down a bit over last few minutes of half, but at only 1-0 it only takes a moment for Nigeria to even it up.

Well then, that was beautiful. Goal in first 30 seconds, Gloster with nice pass, Soto with finish.

2-0 US right after HT. Soto again, with some nice composure. Nice ball from Gloster, too.

Richards off after taking a cleat to the leg. Hope it's not serious because he's our best defender by a decent stretch.

We'll see how fit and in form McKenzie is.

Titans Bastard said:
We'll see how fit and in form McKenzie is.
Click to expand...

WOW. PK is called off by VAR.

I think McKenzie got bailed out by a just-barely-offside call.

We could use a sub, but sometimes Ramos has a Grady Little-esque hook.

Both teams look gassed. Servania comes on for Mendez, which will give the midfield three a bit more defensive bite.

Titans Bastard said:
WOW. PK is called off by VAR.

I think McKenzie got bailed out by a just-barely-offside call.
Click to expand...

There are times when fouling someone in offside position overrules the offside. It happened in Tottenham game this year and they got PK. Not sure what the line is.

Soto comes off injured after crashing into the GK after a nice move by Pomykal & Gloster, so the US is playing down a man.

Soto appears to be getting ready to come back on, which is good.

A foul suffered by Pomykal is under review....so we should be getting more than eight minutes. No red.

2-0 FT. Good win for the US against a tough opponent.

Next up is Qatar, the weakest team in the group. For this group, it should be straightforward to take care of business and move into the Round of 16.

I don’t want to be a Ramos hater, but he has to sub earlier. Don’t stretch guys too thin in a tournament, keep the intensity level high.

But it was the right formation and approach for today. Well done. Had Weah buried one or both of his great looks, the scoreline would better reflect the US’s quality.

Will be interested to see how much rotation there is for Qatar.

I'd also like to see Richie Ledezma. He's a good prospect, and though it's tough to push ahead of Pomykal or Mendez, he could be a valuable option nonetheless.

I've never seen such a big gap between the US and Mexico (in the positive direction) in a given youth cohort before.

US advances with a win over Qatar (UKR win leaves NIG on 3 points, and a NIG win is gonna knock UKR's GD down below the US if US wins).

Can win the group if results break right.

It's weird that a CB like McKenzie is in at RB instead of Julian Araujo, who is a natural RB.

I also wonder why Tab isn't making use of the comparatively abundant depth on the roster. Llanez is a good winger. Ledezma has a ton of quality in the center.

US kinda sloppy to start.

Currently a VAR review for potential red card against US.


Only a single announcer and his voice sounds like a guy narrating a nature documentary.
Last edited: May 30, 2019

Weah rescues US with goal in 75th minute.

Mendez picks up another yellow and will miss the next game.

Frickin’ Tab. No one who can play the ball forward from the central MF.

It's weird that a CB like McKenzie is in at RB instead of Julian Araujo, who is a natural RB.

I also wonder why Tab isn't making use of the comparatively abundant depth on the roster. Llanez is a good winger. Ledezma has a ton of quality in the center.
Click to expand...

Do you remember when some fans & media were calling for Tab to get the USMNT job?

I've suffered through a lot of bad US YNTs, but it's annoying when the team struggles for no reason other than not being set up to succeed.

Playing three CBs and two DMs against a weak opponent is just so cowardly and actually just invites pressure by throwing the lineup out of balance. It's an elementary mistake that any decent coach should know.

Running starters into the ground while also inviting players in YC trouble to get another in a fast-paced tournament is also dumb.

Durkin getting suspended for the R16 game is a blessing in disguise. The USSF is obsessed with Trapp/Bradley style DMs; I know distribution matters but can we get someone in there who can actually defend?

Ugh, Tab. From what I've heard through the grapevine, Stewart/Berhalter let Ramos finish the cycle due to the timing of their arrival, but he'll be leaving after the tournament.
You must log in or register to reply here.
Share:
Twitter Reddit Pinterest Tumblr WhatsApp Email Link
Top Bottom