cshea said:
None of us have seen the kid play. Who knows?

It's been several years now. They're scouting methods don't match up with CSS or other draft guru's. Despite that, they've done pretty well. I trust them.
Click to expand...

They've essentially gotten nothing since 2016. Hard to say they've been crushing it. I guess we'll see, but to go so far off board with their first pick when the kid would be around later is just weird to me.

Sweeney also hasn’t been good enough to try and be this cute.

It’d be one thing if he had an established record of going off the board and nailing his picks, but - he doesn’t.

I’m willing to cut some slack after rd 1 when it’s harder to say there is an obvious or consensus pick, but for me the wounds of going off the board in 2015 still sting. The burden is on Sweeney to prove this can actually work.

Christ you lot are miserable.

Smiling Joe Hesketh said:
Eh. They've gotten 9 total NHL games out of their last 3 drafts. Obv the year before that was McAvoy which was a HR, but then before that was the 2015 debacle.

They've essentially gotten nothing since 2016. Hard to say they've been crushing it. I guess we'll see, but to go so far off board with their first pick when the kid would be around later is just weird to me.
Click to expand...

The stat sounds shitty but it has no context.

Edit: It also doesn't take into account traded first round picks, since first rounders tend to make it to the NHL earlier than any other round, for obvious reasons.

Smiling Joe Hesketh said:
Eh. They've gotten 9 total NHL games out of their last 3 drafts. Obv the year before that was McAvoy which was a HR, but then before that was the 2015 debacle.

They've essentially gotten nothing since 2016. Hard to say they've been crushing it. I guess we'll see, but to go so far off board with their first pick when the kid would be around later is just weird to me.
Click to expand...

They are drafting 18 years old kids. Unless you have a pick in the top 5, it's unlikely the kid sees the ice in the NHL for 3-4 years. I think it is too soon to really judge the 2017 draft, let alone 2018 and 2019. In 2017 they got Vaakanainen and Studnicka, who we have high hopes for and look to be NHL contributors. They also picked Jeremy Swayman who has been the best goalie in college hockey for 3 years. Who the hell knows how he develops, but I'd say so far that pick has turned out OK. 2018 they got Andersson who was at least good enough to get them to help land Kase. Jakub Lauko and Curtis Hall both look to be solid prospects. It's far too soon to make any sort of judgement on the 2019 class.

Smiling Joe Hesketh said:
Yeah. Plus if he's going to OSU at 19 he's probably at least four years away from making the big club, so he provides zero help for an aging roster short term.

Nick Robertson is the only player from the 2019 2nd round that has played an NHL game. 2018 2nd round picks have played a total of 28. Going back to the 2017 draft: that second round actually got into games last season, finally. The second round seems to have a 2-ish year delay in reaching NHL viability.

I don't think there was a pick available that would help the big club in the immediate term.

Does that push back his likely pro debut another year?


Bruins connection via his roommate.

Big run on D right now, with 9 of 11 picks in the 3rd going to blueliners.

Smiling Joe Hesketh said:
Does that push back his likely pro debut another year?
Click to expand...

I don't think it'll impact their decision making all that much. They drafted him as an overager. If they think he's ready for the AHL, they'll sign him out of the USHL or after his freshman year at tOSU.

Another thing I'll mention is that the Bruins in the past few seasons have not drafted much out of the Canadian junior leagues. Maybe it's just the way things fell, but it also could be part of their decision making. They took Studnicka and Cedric Pare in 2017 but haven't drafted a CHL player since. Prior to Studnicka, they hadn't picked a CHL player since 2015.

I think in some of the draft ranking lists, there's a bias towards CHL players because they have more viability. For whatever reason, the Bruins seem to prefer NCAA and European mens league players. Again, maybe it just worked out that way, but there seems to be a bit of a pattern developing.

Bruins 2 picks away from their 3rd round pick (89) and Sean Farrell is still available.

Bruins on the clock. 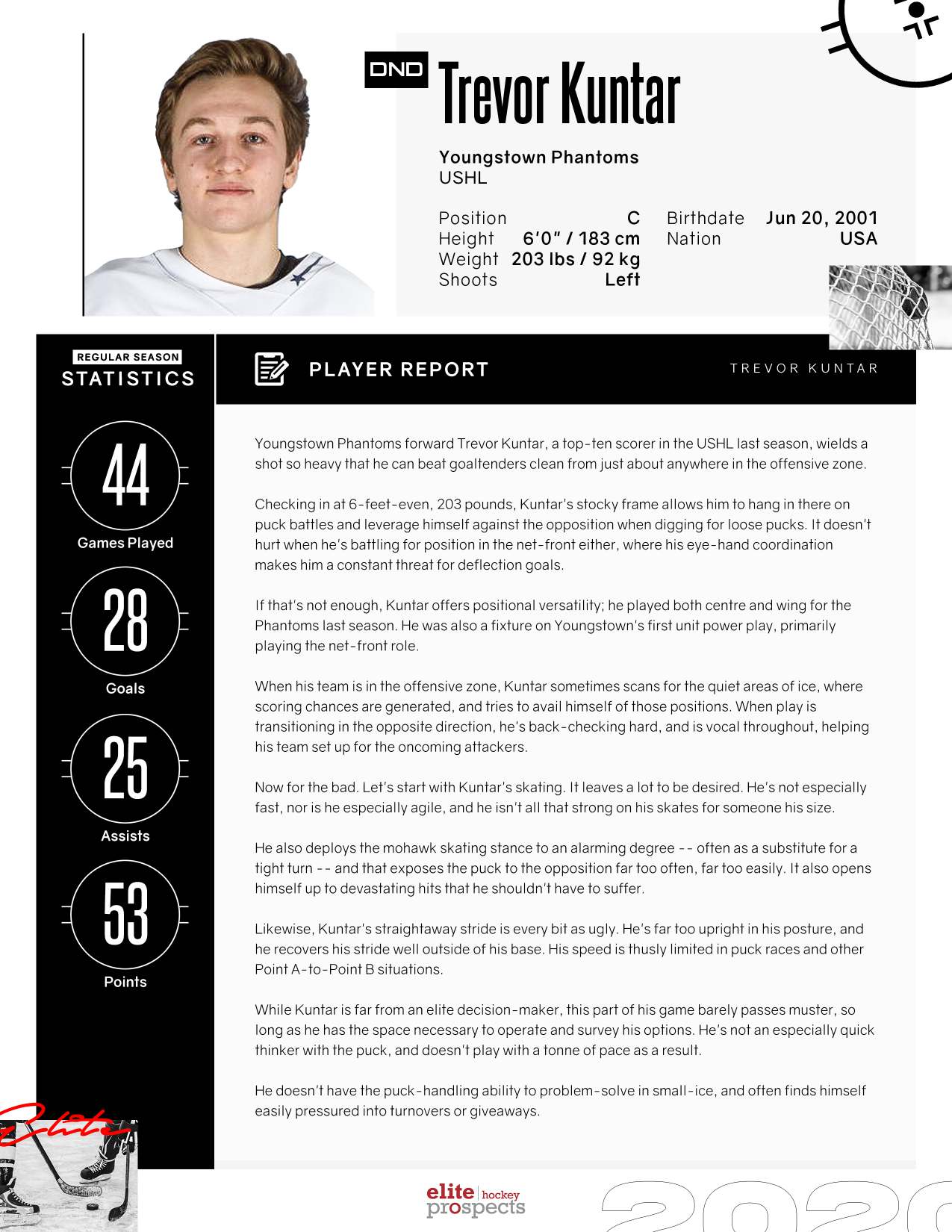 Trevor Kuntar, a top-ten scorer in the USHL last season, wields a shot so heavy that he can beat goaltenders clean from just about anywhere in the offensive zone. Checking in at 6-feet-even, 203 pounds, Kuntar's stocky frame allows him to hang in there on puck battles and leverage himself against the opposition when digging for loose pucks. -EliteProspects 2020 NHL Draft Guide
Click to expand...

So he has a great shot, but sucks at skating.

I was thinking skinny Lucic but Murray is more apt.

Skating can be worked on. I hope.

Skating can be worked on. I hope.
Click to expand...

From what I’m reading, he doesn’t have the meanness/physical profile to be a Lucic.

#143 by Central Scouting for inquiring minds

If this kid becomes Glen Murray we will all be ecstatic.

Bruins have no picks in the 4th round, which begins now.

Nick Ritchie wishes he had a good shot.

I'm afraid to say the name

I was worried about setting off the IT filter at my office when I googled him.

Game threads will be dangerous

The Napkin said:
they're doing a zoom thingy about the draft thus afternoon for STHs, wonder if there will be any actual questions/answers this year

As tradition, every year Season Ticket Holders come together for our annual Boston Bruins Draft Party. This year we're going virtual! Join Cam Neely & Don Sweeney TODAY at 5:00 PM for a STH-only post-draft conversation. They will take your questions and review the Bruins 2020 draft picks.
Click to expand...

Montreal drafts Farrell. Great pick for them at the end of the 4th

Yevgeni Oksentyuk is still available. He was originally projected as a late 2nd/early 3rd pick.

If he’s still there when the Bruins draft, I’d love to see them take a flier on him.

How about THIS name:


It's why I could never be a GM. I'd have moved him up the draft board based on his name alone.

DJnVa said:
How about THIS name:


It's why I could never be a GM. I'd have moved him up the draft board based on his name alone.
Click to expand...

That is a kick ass name

Bruins traded their 7th to Toronto for Toronto's 2021 7th.

Which - might be worse value than this years 7th. I don't understand what Sweeney is doing.

They'll be up against the contract limit anyway, getting an extra pick next year when they'll more certainly have Chara + the expansion draftee's slot is pretty reasonable

Sweeney should have got a 6th next year for the 7th. That’s what BB would have done.

Cornering the market on Masons.

Minor note on Langenbrunner. Jamie is the Bruins Director of Player Development. Jamie will not oversee his son's development, it will be handled by Chris Kelly.

Also, didn't see it mentioned, but the B's took Riley Duran with what ended up being their final pick. Local kid, from Woburn and is playing at Lawrence Academy. Plays center.

DJnVa said:
How about THIS name:


It's why I could never be a GM. I'd have moved him up the draft board based on his name alone.
Click to expand...

That is Rhode Island's own Gunnarwolfe Fontaine. He has been viewed one of (if not the top) RI kids in his age group for at least 8 years. He wasn't even the top drafted kid from his hometown. Brett Berard went in the 5th round to the Rangers. Both grew up in East Greenwich.

I had no idea that Kelly had joined the Bruins staff. I thought he was still with Ottawa. I was honestly disappointed they didn't go after Marc Recchi for that position, but retract that disappointment.

The zoom call for the 2011 championship was in April. I remember a couple people commenting positively about Kelly's future coaching moves. I wonder how much they knew at that point.

The Bruins are getting killed for their draft because of all the college players they reached on. What is it about Canadian junior players that they don't like?

RedOctober3829 said:
The Bruins are getting killed for their draft because of all the college players they reached on. What is it about Canadian junior players that they don't like?
Click to expand...

If I was to guess, based on my non lawyer understanding of entry level contracts, I would think it’s that they have to make a decision on them earlier. Take DeBrusk for example. He’s not a finished product yet at 23, but he’s already an RFA. If he had gone to college at 20, he’d probably still be in school, and that pre-RFA window would be his age 24-26 year old season instead of his 21-23 year old seasons.

CHL players you have 2 years to sign or they go back into the draft. Cedric Pare and Daniel Bukac are recent Bruin examples of drafted players from the CHL they didn't sign. Once they lose junior eligibility, it's pretty much the AHL or NHL. For the NCAA you hold their rights through their academic senior year so you get a few more years of control/development before you need to make a decision (of course, the NCAA players that make it to their junior or senior year likely are busts anyway).

I think it's essentially a combination of they feel the NCAA and Europe are better developmental leagues than the major junior leagues in Canada plus they get a tiny bit of extra control.
You must log in or register to reply here.
Share:
Twitter Reddit Pinterest Tumblr WhatsApp Email Link
Top Bottom